Acharya Mangalananda is a direct disciple of the great modern woman Saint, Anandamayi Ma. When Swami Sivananda met with Ma he called her “The finest flower the soil of India has ever produced”. Mangalananda went to India for the first time in 1973 when he was just 19 years old and spent the course of two years traveling with Ma and eventually receiving Initiation from her. He has lived in her ashrams and in association and under the guidance of some of her major disciples ever since. He spent from 2001–2013 living in her ashram in Central India where he was sent by Sw. Bhaskarananda, Ma’s main Swami, to help start a school there. He has followed the Path of Bhakti Yoga and Mantra Yoga as he was trained in by Anandamayi Ma and her Disciples. He still serves as an Acharya–an appointed Teacher–of Ma Anandamayi Ashram in Omkareshwar, India, where he is a Trustee and Administrator. 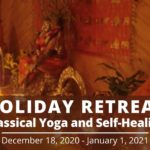