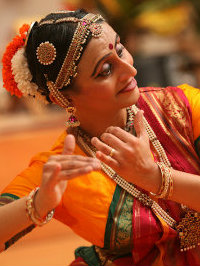 Anuradha Prabhashankar is an accomplished Bharatanatyam dancer from the Bay area. She learned her art form in India at a very young age. Now a mother of two, she has been performing at the Sivananda Ashram Yoga Farm for many years. Bharatanatyam style of dance is rigorous in its foot work, facial expressions, eye movement and mudras (hand gestures). The abhinaya (mime) part of the dance often depicts mythical stories of Gods and Goddesses. It was originally a temple dance. Anuradha dedicated all her performances at the Sivananda Ashram Yoga Farm to her late father who is a devotee of Swami Sivananda.