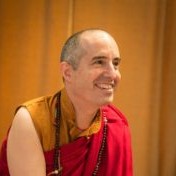 Tulku Sherdor is born in Montreal, Canada in 1961, he began studying Buddhist Insight meditation from a very young age, and met his principal teacher, Tulku Urgyen Rinpoche, in Nepal in 1981.  He was fortunate to study with other pre-eminent masters of the 20th century, including His Holiness Dilgo Khyentse Rinpoche, Khetsun Zangpo Rinpoche, Dung Say Trinley Norbu Rinpoche, Chokyi Nyima.