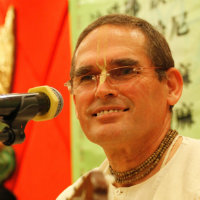 Atmarama dasa is a devotional singer, sacred music composer and expert musician; who has become well known for his power to transmit devotion and spiritual energy. Since 1985 he has lived in Vrindavan, India (the holy place where Lord Krishna appeared on this earth 5,000 years ago), where he studied Sanskrit and Indian classical music, while engaging in devotional service. Living in Vrindavan absorbed in spiritual life, his devotion deepened and in turn, his musical ability blossomed. He developed a strong desire to share the nectar of Vrindavan with others and realized that he could use his God given gift of music as a humble offering to serve all of humanity. An event with Atmarama is one full of devotion incorporating timeless wisdom with Sanskrit songs and chants. He sings verses from the Bhagavad Gita, Upanishads and the Brahma Samhita as he plays the flamenco guitar combined with Indian raga. His music transports the listener to the realm of the Divine and the knowledge he shares uplifts the consciousness.