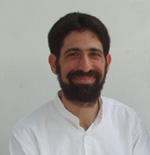 To deepen his understanding of the ancient scriptures and mantras, he studied Sanskrit under the tutelage of the Sanskrit Scholar Dr. Sarasvati Mohan in the 2000’s. Over the past decade, he has been spending time each year in personal retreat in Uttarakashi, Himalayas, where he attends Satsang with senior sadhus and monks. Since 2013, he has had the opportunity to the study Vedantic scriptures in a traditional fashion. With close to 3 decades of practice, study and teaching experience, he offers yoga and Vedanta courses and retreats in Fremont and at various centers and ashrams.